I've interviewed Bob Dylan twice - this encounter in 1986 and again in 1992. I found the original typed piece the other day and this is pretty much as it was written before being widely circulated in Australia and appearing as a cover story in BAM magazine in America. Dylan apparently disliked two things about the published piece - my comment that he has a weak handshake (he does) and that I mentioned him phoning his children, something I heard he bawled Michael Gudinski out for telling me. 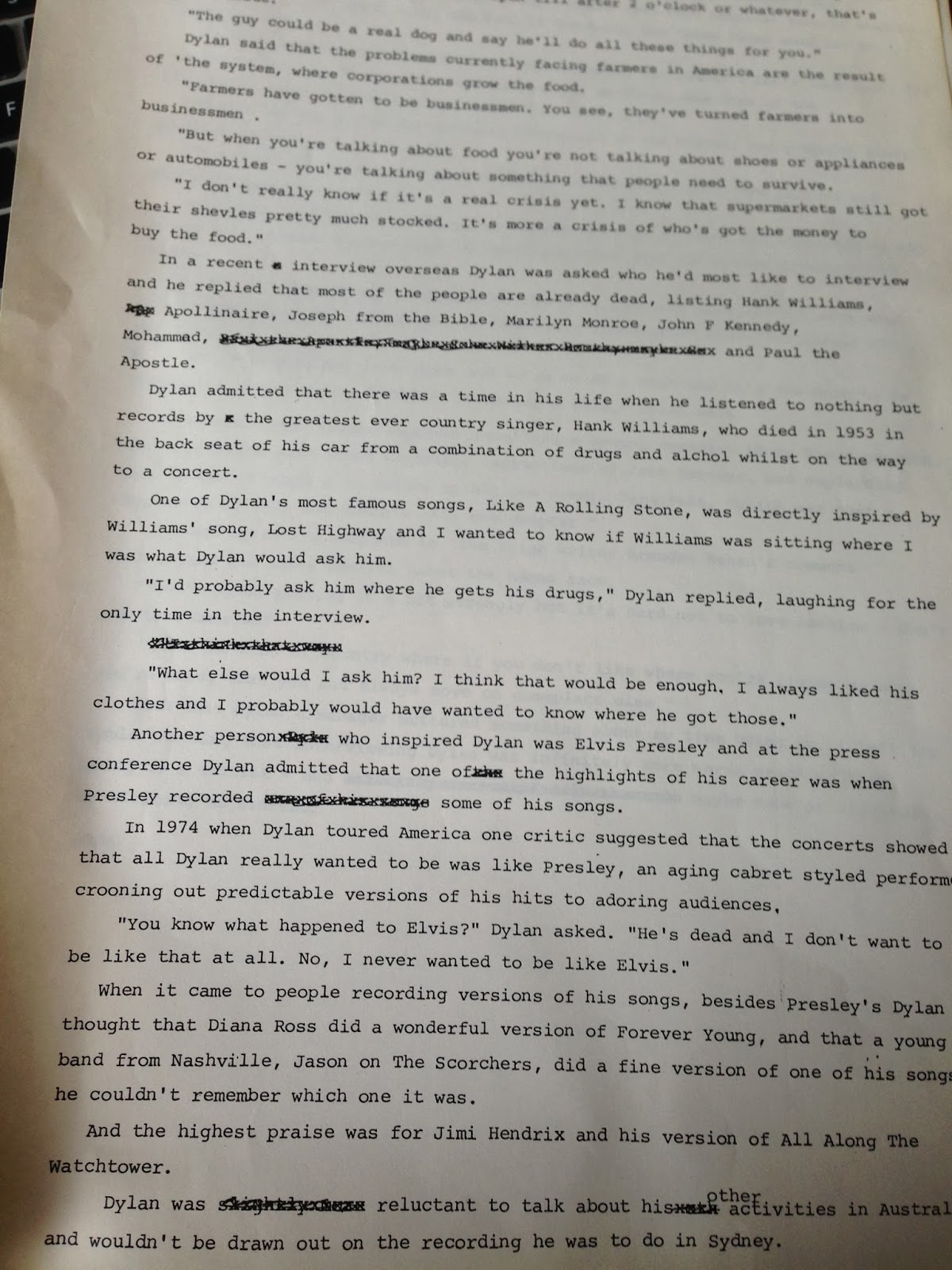 Lincoln Hall, part of the first Australian expedition to climb Mt Everest, wanted to interview Bob Dylan whilst he was in Australia for his third concert tour.

Through Dylan's publicist, Patti Mostyn, Hall sent a copy of the book he'd written about the Everest adventure to Dylan's manager, Elliot Roberts, hoping that its contend might inspire Mr Zimmerman to talk to him.

The answer as a definite no.

"Climbing Mt Everest is easier than getting an interview with Bob Dylan," Roberts replied.

If that is indeed the case then whilst in New Zealand with the Dylan/Tom Petty and The Heartbreakers entourage I achieved the journalistic equivalent of a stroll to the top of the world's highest mountain - and I'm not sure which would be easier.

At 2am in the bar of the Regent Hotel in Auckland I interviewed Bob Dylan, supposedly the only face-to-face interview the singer and songwriter would do whilst in Australasia.

Besides last week's press conference at Brett Whiteley's Surry Hills gallery Dylan had only consented to one other interview, conducted in Los Angeles, with 60 Minutes, the resulting confrontation  being described by reporter George Negus as something akin to having teeth pulled out.

Dylan has rarely been an easy interview subject. For starters he doesn't give many, although in the past year with the release of his current album, Empire Burlesque and the retrospective Biograph, Dylan has entered  into one of the most verbose periods of his career with most major music orientated publications in America being granted lengthy interviews.

But in Australia Dylan's response to questions was closer to the clever, evasive, confident Dylan of the mid-iSxties who had reporters tearing their hair out in their futile attempts to get the cocky young singer to answer a question in terms they understood.

Twenty years later Dylan is not quite so clever or quite so verbally quick/ If anything he appears as someone who's been asked, and answered, every conceivable question and is totally reluctant to respond expansively to any question that doesn't interest him. 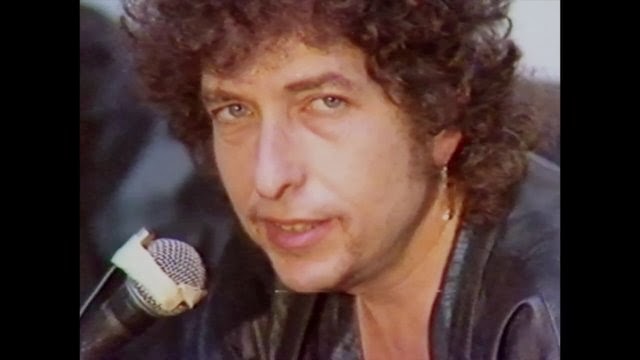 Dylan's consent to do interviews,  press conferences and videos (three things he obviously loathes) seem to be totally at the behest of manager Roberts, a Jewish heavyweight in the music industry whose clients also include Tom Petty, Neil Young and The Cars.

The Sydney press conference was a typical encounter:
Q - What is the difference  between the Bob Dylan of the Sixties and the Dylan of today?
A - Not much because I still do most of the same material.

Q - In the Sixties your songs were described as anthems for a generation. Do you still feel a responsibility in that direction?
A - No.

Q - Do you think you've passed the apex of your career?
A - What career. I've never had a career. I'm someone who doesn't work for a living.

Maybe you could put it down to the Australian media's notorious reputation for asking dumb questions, but after my interview I'm of the opinion that no matter how good or bad the questions Bob Dylan talks about what he wants, when he wants - and no-one's going to get him to change that.

My Dylan encounter had a sense of 'event' from the start. No interviews had been the position until after Wednesday night's concert in Wellington when Frontier Touring Company's Michael Gudinski informed me that, yes, Dylan would do one interview, probably after the Auckland concert - but the placement of the interview was to be delayed.

It's rumoured that Frontier had paid Dylan up front for six Sydney concerts and were having trouble selling five so a widely circulated Dylan interview was deemed necessary to sell the remaining seats.

After the Auckland concert I drove back to the Regent Hotel with the entourage and waited in Gudinski's room. Then I was told Dylan wanted to have a bath. Three quarters of an hour later Dylan was clean, relaxed and wanted to call America, supposedly his children. A half hour later I was told that Robert Zimmerman would see him in the downstairs bar.

I'm introduced to a slightly pudgy Dylan who gives a rathe weak handshake, his manager suggesting we retire to a table where he remains the entire interview, assuming an equally intimidatory role, wincing at questions he obviously doesn't find suitable and helping Bob out with responses to others. 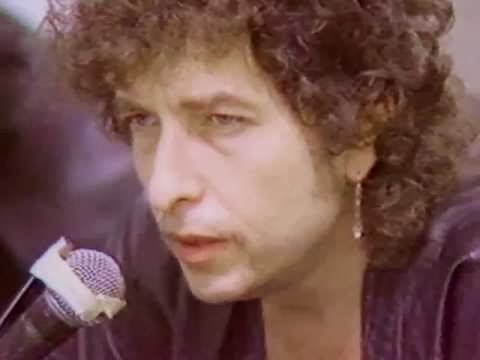 I started badly, suggesting that Dylan's association with the classic American rock'n'roll band The Heartbreakers was good for him, bringing out performances the likes of which he hadn't given for a long time.

More than most performers from the Sixties Dylan has been seen as someone who's politically aware, knows the difference between right and wrong, and writes songs that have been the anthems for any number of organisations and movements expousing a variety of causes - but when I ask about his politics Dylan stares at me from behind his dark sunglasses.

"Well I never had any politics, I'm still searching for some," he said. "Maybe one of these days I'll run into some that make sense to me but at the moment I don't even know what politics are to tell you the truth."

Whilst thinking to myself that this is a load of garbage I suggest that if nothing else Dylan's association with Live Aid and the Farm Aid Benefit are a case of him taking a stance on certain political issues.

"It might be," he smiles. "I don't know what politics it would be other than everybody is affected by the farm crisis so it transcends politics I think.

"You trust the guy. Anything he wants to do, if you trust him it doesn't matter what he does because you're going to agree with what he does anyway.

"But the people who run in politics, they run on issues - what they would just do on certain issues, so you don't ever have a chance to know the man, you know what I mean?

"If you meet someone that you think is OK you'll go all the way with that person, right or wrong you're going to go all the way, but if he's just talking about what he's going to do to keep the bar open till after 2 o'clock or whatever, that's just an issue.

"The guy could be a real dog and say he'll do all these things for you." 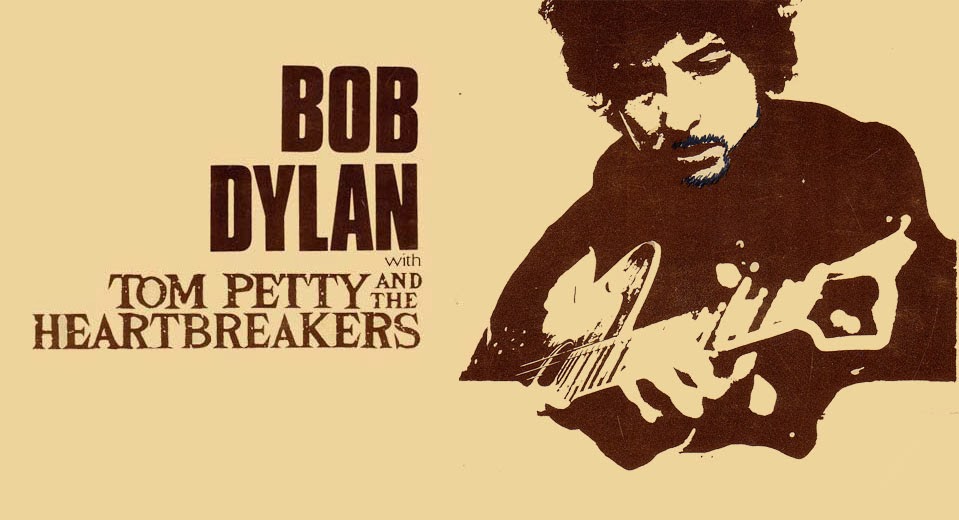 Dylan said that the problems currently facing farmers in America are a result of the 'system', where corporations grow the food.

"I don't really know if it's a real criss yet. I know that supermarkets still got their shelves pretty much stocked. It's more a crisis of who's got the money to buy the food." 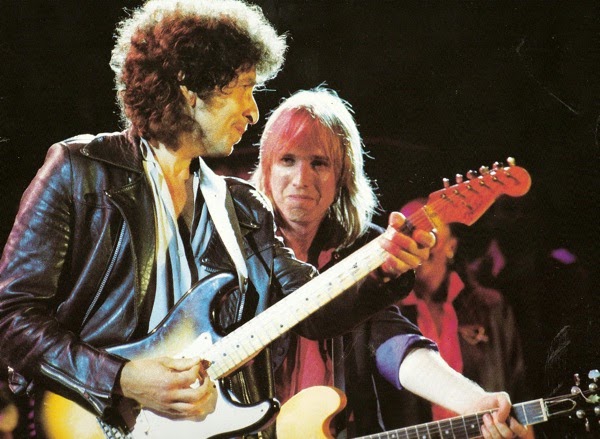 In a recent interview overseas Dylan was asked who he'd most like to interview and he replied that most of the people are already dead, listing Hank Williams, Apollinaire, Joseph from the Bible, Marilyn Monroe, Joh F. Kennedy, Mohammad, and Paul the Apostle.

Dylan admitted that there was a time in his life when he listened to nothing but records by the greatest ever country singer, Hank Williams, who died in 1953 in the back seat of his car from a combination of drugs and alcohol whilst on the way to a concert.

One of Dylan's most famous songs, Like A Rolling Stone, was directly inspired by Williams' song Lost Highway and I wanted to know if Williams was sitting where I was what Dylan would ask him.

"I'd probably ask him where he gets his drugs," Dylan replied, laughing for the only time in the interview.

"What else would I ask him? I think that would be enough. I always liked his coshes and I probably would have wanted to know where he got those."

Another person who inspired Dylan was Elvis Presley and at the press conference in Sydney Dylan admitted that one of the highlights of his career was when Presley recorded some of his songs.

In 1974 when Dylan toured America one critic suggested that the concerts showed that all Dylan really wanted to be was like Presley - an ageing cabaret-styled performer crooning out predictable versions of his hits to adoring audiences.

"You know what happened to Elvis?" Dylan asked. "He's dead and I don't want to be like that at all. No, I never wanted to be like Elvis.." 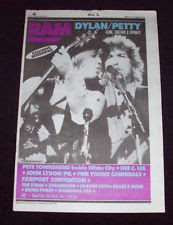 When it comes to people recording versions of his songs, besides Presley's Dylan thought that  Diana Ross did a wonderful version of Forever Young, and that a young band from Nashville, Jason And The Scorchers, did a fine version of one of his sings but he couldn't remember which one it was.

And the highest praise was for Jimi Hendrix and his version of All Along The Watchtower.

Dylan was reluctant to talk about his other activities in Australia and wouldn't be drawn on the recording he was to do in Sydney.

Soon after arriving Dylan, Petty, The Heartbreakers, and Fleetwood Mac's Stevie Nicks. along with Dylan's four black backup singers, went into Festival Records studios and recorded a new Dylan song, Band Of The Band, the theme song for an unspecified movie.

Dylan has been involved with three movies based around aspects of his career - Don't Look Back, the unreleased Eat The Document and Renaldo and Clara. Some of the Australian shows are being filmed by Gillian Armstrong.

"That'll be for  for national television in the States, and probably other parts of the world," Dylan said.

"I picked Gillian because she was really enthusiastic about the project and she's a competent film maker."

According to Dylan the film may or may not be shot in black and white and it may or may not include footage shot at locations other that the Sydney Entertainment Centre.

In fact for someone who traditional likes to maintain such control over what is released under his name Dylan was remarkably unconcerned about the format of the film.

"We're playing the live shows and we're on tour and it's too much to be traveling around and be involved in making a film," Dylan said.

Otherwise Dylan seemed happiest (but far from expansive) recalling seeing comedian Lenny Bruce perform, his association with Allen Ginsberg, impressions of Jack Kerouac, and explaining that he has no plans to follow up his one novel, Tarantula, "which was just a chapter in my life and there's only one chapter."

I asked Dylan his response to Irish writer Brendan Behan's comment that anyone who hates America hates the human race.

"That's kinda putting it a bit strongly but it's hard not to love America - don't you love America?

"It's the kind of country where if you don't like where you're living or what you're doing then you can always move on someplace else."

With that Dylan's manager muttered something about time being up. I left the table thinking that interviewing Dylan was infinitely more nerve wracking than going to a a dentist - and maybe even as difficult as climbing Mt Everest.